CentOS Linux 8 will end in 2021 and shifts focus to CentOS Stream. Then next is … 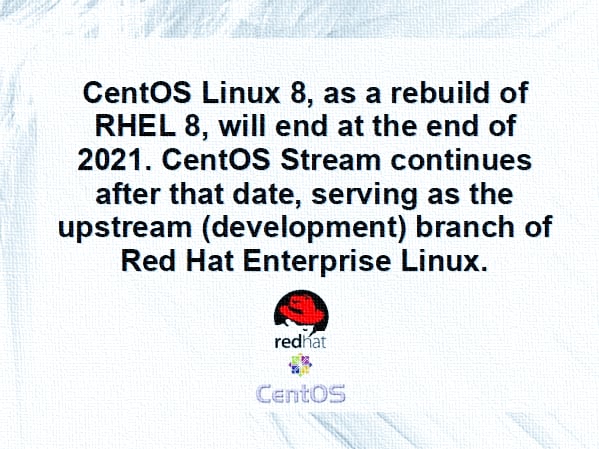 CentOS is an acronym for Community Enterprise Operating System, and it is a 100% rebuild of RHEL (Red Hat Enterprise Linux). While RHEL costs money, CentOS offered as a free community-supported enterprise Linux distro. Developers and companies who are good at Linux and don’t want to pay RHEL support fees always selected CentOS to save money and get enterprise-class software. However, the free ride is over. Red Hat announced that CentOS Linux 8, as a rebuild of RHEL 8, will end at 2021. CentOS Stream continues after that date, serving as the upstream (development) branch of Red Hat Enterprise Linux.

CentOS project history
We saw the first CentOS release in May 2004 called CentOS version 2 and was forked from RHEL 2.1AS (advance server). It was an instant hit among Linux lovers, web hosting companies, developers, and the HPC community. CentOS offered enterprise-grade software free of cost with self-support and community support are driven by email mailing lists or online forums. It is a great way to save money on an expensive RHEL contract when you no longer need support or training contracts.