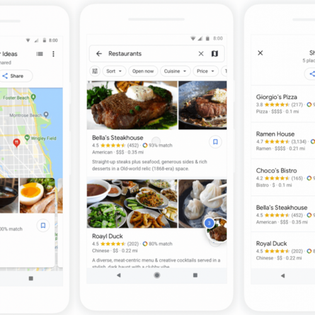 About a week ago, my wife’s phone number was mistakenly included in a stranger’s group message about where to get together for dinner. She was swamped with what seemed like a million messages as the people in the group went back and forth suggesting, discussing, and expressing their likes and dislikes for one restaurant or another. The longer the interchange went on, the harder it became for them to reach a decision.It can be easy to lose track of what’s going in a message storm like this. Suggestions and comments roll off the top of the screen and you have to keep scrolling back to remind yourself which restaurants have been suggested and whether they’re still being considered. It’s too bad the group didn’t wait until this week to go out to dinner because a new feature began rolling out to Google Maps today that goes a long way toward solving this problem.

The group planning feature that Google announced at their I/O event last Spring is rolling out for Google Maps on Android and iOS this week. A long press on a Maps location adds it to a short list that’s held in a bubble attached to the right side of the screen. The list bubble can be sent with a text message, and all the recipients can add or delete places. Once the list has stabilized, the group can vote together on a place to go.

I’m a cognitive scientist, retired professor, musician, gamer, and avid cyclist with a B.A in History, an M.S. in History and Philosophy of Science, and a Ph.D. in Cognitive Psychology. In addition to papers in professional scientific journals, I’ve written the book Nutritio…