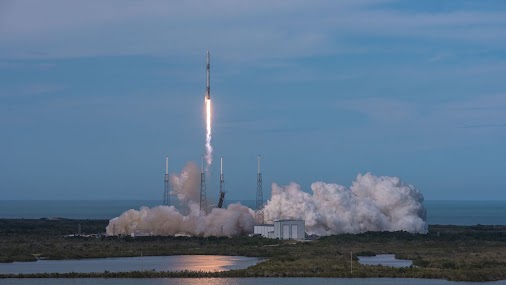 Employing a used Falcon 9 / Dragon combo for the third time

Early Friday morning, SpaceX will launch its 15th cargo mission to the International Space Station for NASA, sending up nearly 6,000 pounds of supplies on top of its Falcon 9 rocket. On board the vehicle are shipments of food and water for the six astronauts living on the ISS, as well as new science experiments and technologies to be tested out in microgravity. And within that haul includes the first ever AI robot “crew member” to live on the station.

The robot’s name is CIMON — for Crew Interactive Mobile Companion — and it looks a bit like a volleyball with a computer screen on one side. The screen displays a simplified cartoon face that the bot will use to interact with the humans on the ISS. And to maneuver around, CIMON is equipped with 14 internal fans that propel the white ball, by sucking in the station’s air and expelling it to move in whatever direction it needs. That means CIMON can “float” throughout the station, zooming up to astronauts that call its name and nodding in response to questions.